After several dry runs with John Strand, Joe and Ewald Heer (and probably others I don’t recall), the filming was scheduled. I expected that one of the more senior people would perform the demo, but I was told to do it myself.

When the cameraman arrived, I ran through the demo for him while he decided how to sequence his shots, and then we ran through it a few times for the film. He made shots from inside the demo area; through the window; from behind me as I typed various commands on the typewriter, pressed switches on the PDP-1, and turned the thumbwheels. At one point he advised me to use two fingers to flip one of the console switches, as using one finger looked too “feminine.” He also recorded the views on the monitors, using a special synchronizing device so that dark bands weren’t seen rolling down the screens on the film.

Although the system allowed for restarting if the rover ended up in a bad position, this was never necessary for the filming. Taping took only two days. I later heard that the shots had been edited and presented to JPL management. The finished demo must have been less than a half-hour. I never saw it, nor heard about how it was received. However, within a year, JPL had a more mission-specific rover program going. The following paragraph appeared in the JPL 1972-1973 Annual Report:

A research program in robotics and artificial intelligence was started to develop semi-autonomous machines that can carry out exploratory tasks on planets without step-by-step human direction from Earth. Success would obviate communication time delay problems and possibly increase the amount of scientific data obtained. The first goal is a laboratory breadboard that will integrate the functions of locomotion, manipulation, vision, and decision-making. The first machine should at least be able to store a command, move to a designated site, and pick up a rock.

I’ve made a 3D animated video representing the demo, linked from the Contents for this article. Here is a frame from the demo animation. You can watch the animation at Vimeo: Generation Zero: The Demo 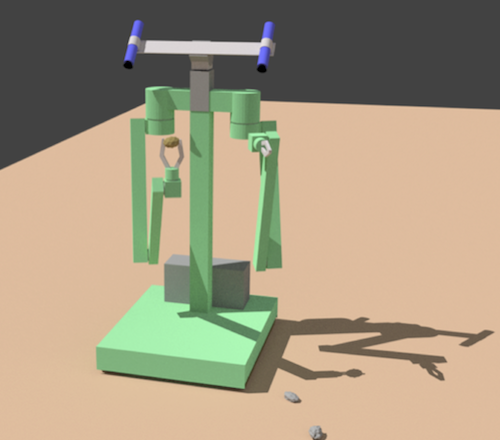 A frame from my recreation of the demo. The rover holds a target rock in front of the cameras for examination by Mission Control.

Next: Epilog – Other JPL Work