In the period between the videotaping and its presentation, I continued to refine the system. I made a sequence to hand a rock from one gripper to the other. I also wrote up notes for a report on the development system. Unfortunately, I never made precise drawings of the rover or its environment, and I didn’t take pictures. Everything I’ve shown here is either generic or from my memory.

I developed a report about the capabilities of the programs I developed for the rover, but I’m sure nobody ever read it. The PDP-1 was obsolete before I got my hands on it, and I doubt it was ever used again. I suppose the rover was stored for a while before being scrapped.

By the time JPL started its next rover project, I was working on another assignment, in JPL’s Image Processing Laboratory (IPL). I recall seeing a test bed rover rolling through the hallways near the IPL, and wishing I could work on that. The IPL was interesting in its own way; but as jobs go, nothing else compares with Generation Zero of JPL’s rovers. I continued to follow developments, and a mere 25 years after Generation Zero, the rover Sojourner rolled onto the surface of Mars. 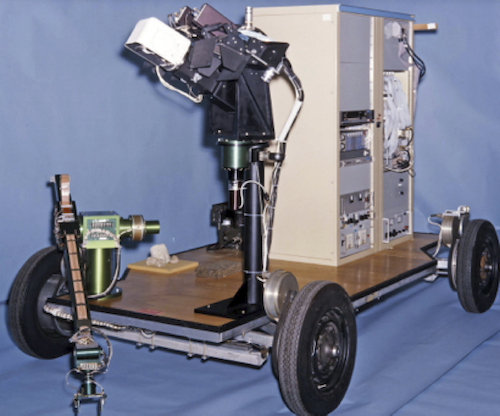 A robotic rover test bed from about 1973. This roamed the halls near JPL’s IPL.

I have since had other interesting jobs, but it took me a long time to realize that my “career” had peaked so early. Generation Zero was my best job ever.

Back to Table of Contents