My first assignment was to work with Dr. Leonard Jaffe. In the mid-1960s, he had been the project scientist for the Surveyor program, which landed a number of craft on the moon in preparation for the Apollo manned landing program.

The Surveyor craft made soft landings on the surface of the moon, and used cameras to image the surface. Some of them used a scoop to dig trenches to test the firmness of the lunar soil. Prior to these probes some people feared that a lunar lander (or an astronaut) could sink out of sight into a deep layer of loose dust.

In April 1967, Surveyor 3 was the second successful landing, and the first with a scoop. Dr. Jaffe’s team analyzed camera images and other measurements made on the lunar surface to learn much about the lunar soil. Later, its location was selected as the target for the landing of Apollo 12, with Pete Conrad and Alan Bean. In an impressive feat of navigation and piloting, Conrad brought the Lunar Module down only a couple hundred yards away from Surveyor. As part of their mission, Conrad and Bean walked to Surveyor, took pictures and removed some parts for return to Earth, including the scoop with some lunar soil still in it. Apollo 12 returned to Earth on November 24, 1969.

Pete Conrad standing at Surveyor 3, with the Lunar Module in the background. The scoop can be seen on its scissors-like arm extended beyond Conrad.

At JPL, Len Jaffe was not directly involved with the Apollo program. However, as the Surveyor project scientist he had some claim to investigate the samples returned from Surveyor.

As I understood it, the rocks, soil and pieces of Surveyor were taken to Houston for processing. Members of the Apollo science team used some of the samples and stored others for future analysis. They used a brush to remove soil samples from the Surveyor pieces, including the scoop. Jaffe was not among the team that analyzed those samples; however, he was given the brush, which had minute amounts of fine lunar particles clinging to the bristles.

The brush was placed in a solvent that loosened the particles from the bristles, and they were collected on microscope slides. The slides were imaged with a scanning electron microscope. This gave a number of images showing a jumble of irregularly shaped particles lying on a flat surface.

My assignment for Dr. Jaffe was to measure the sizes of the particles, record the sizes on punch cards, and write a program to analyze the distribution of sizes. (The program was written in an early computer language called Fortran.)

How do you measure the size of an irregular object? Dr. Jaffe instructed me to draw (with a red pen) the shortest possible line across the middle of each particle, and measure its length with a ruler. Each photograph had a known magnification (typically 2000x to 5000x), so the length of the line was easily converted to the actual size of the particle. The picture below is dated December 22, 1971. Evidently, the process from return of the sample to analysis of the measurements took a little more than two years.

As I performed the tedious measurement task for hundreds of particles, I wrote the measurements on a keypunch form. This peculiar object from ancient computing history was a piece of paper with 24 rows of character spaces, 80 characters to a row.

A keypunch form for writing Fortran programs, one character per block. It was also used for recording data, such as the measurements of particles.

The procedure was that a programmer or analyst would write down the information to be fed into a computer (either data or a program to process some data), and a keypunch operator would punch it onto the cards, a process similar to normal typing. Once the cards were punched and their contents were printed out, I compared the printout with the forms, line by line and character by character, to ensure there were no keypunch errors.

For the programming, I similarly wrote out a program in Fortran on keypunch forms. For this purpose, the keypunch form identified certain columns that had special significance for the Fortran language; for instance, each line might have a number in the first five columns. The statements of the program could refer to the line numbers to create loops or if-then branches. The last eight columns received a sequence number so the deck could be placed back in order in the event of it being dropped and the cards scrambled (a fairly common occurrence). The decks of cards were held together with rubber bands, a necessary tool in computer centers of the day.

A keypunch card, corresponding to one line on the keypunch form. This one contains a single line from a Fortran program, with a sequence number on the right, “PROJ039”.

The console of an IBM 1130 computer, about the size of a desk. The card reader and printer were in cabinets about the same size.

Once the first version of the program came back from the keypunch operator, I was finally allowed to touch a computer. JPL had a number of computers of different types. One was an IBM 1130, which was small enough to fit into a console not much larger than a desk (though the card reader and printer were in separate cabinets about the same size).

I was able to run the deck of cards containing the program on this computer, and immediately obtain the resulting printout. As I found errors in my program, I used a keypunch machine myself to type replacement cards. In this way, I wrote and debugged the program that analyzed the sizes of the lunar fine particles over a few days. No one else was using the 1130 during this time. It was almost like having your own personal computer! Of course, the only way to get information into and out of it was by punch cards and a large, noisy printer.

The result of the analysis was to define a set of ranges of fine particle sizes (the largest were one thousandth of a millimeter), and count how many particles of each size were present in the sample. The logarithm of the counts was plotted against the logarithm of the sizes. 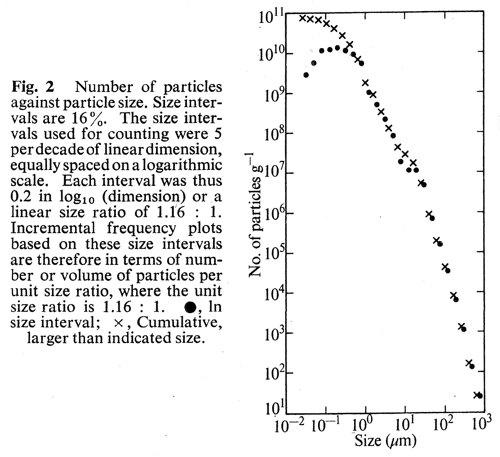 An example of data points and a “power law” plotted on a log-log chart.

Dr. Jaffe wrote up the results, with John N. Strand as co-author, in a paper titled “On-surface and laboratory size measurements of fine lunar particles”, which was published in Nature Physical Science in January 1973. In the figure above you can see how closely the data points conform to a power law, except for the smallest sizes. The summary (from nature.com) says:

Apollo 12 astronauts brought back to Earth the scoop of the soil sampler from Surveyor 3, which contained 6.5 g of lunar soil. This same material, and material within a few metres of it, had been studied on the lunar surface with Surveyor 3. Laboratory measurements of the particle size distribution of the returned sample could provide a direct comparison and permit evaluation of the techniques used for on-surface size measurement of unresolved particles.

Dr. Jaffe kindly included my name in the acknowledgements at the end of the paper. If you’re interested, you can read the whole paper (it’s only three pages).