The Making of ‘I Saw Them Ride Away’ 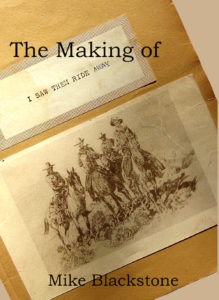 Harry Gant’s memoir, I Saw Them Ride Away, brought us his voice and views on the real Old West and how Hollywood failed to depict it. Some of the stories in his memoir were well known to his family, but many were new even to them.

While preparing his work for publication, cross-checking his names, dates and other facts, we confirmed much of what he said and found some new stories. He wrote, “My footprints in the sands of time will be obliterated at my demise, by the first rain.” We certainly didn’t expect to find many footprints fifty years after he wrote those words. But much to our surprise, the vast resources available through the Internet revealed many of his footprints, and put us in touch with real people with connections to him.

Most amazing was the “missing chapter,” the story he didn’t tell, but should have. None of his living family members knew of this story, either from him or from his sons. We are pleased to bring it to view for the first time, and to propose a reason he might have left it out of his memoir.

The pictures from the book are available for viewing online, larger and with better quality than the printed versions.

Along the way, we developed an extensive set of cross-references from Gant’s memoir to Internet and other sources. We are compiling these as a separate list of the sources that we found while cross-checking the book.